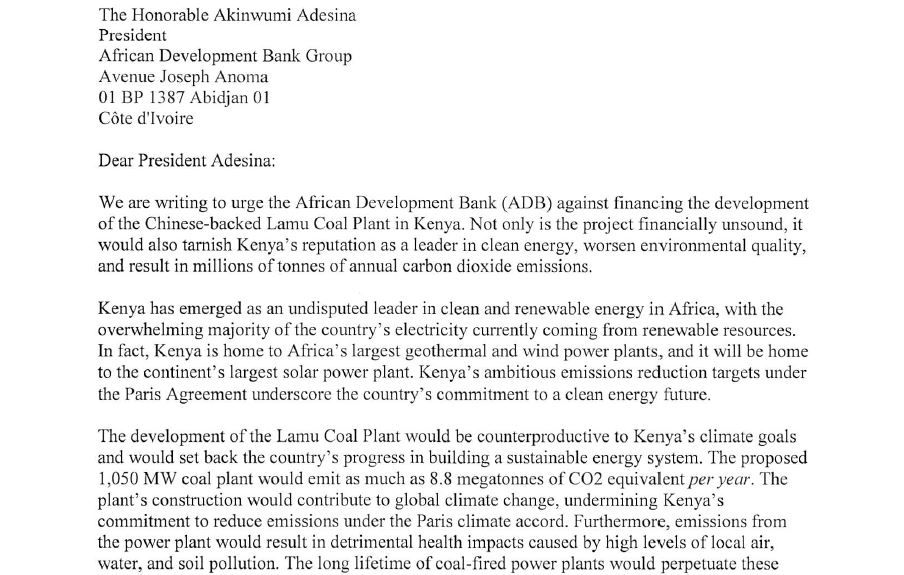 We are writing to urge the African Development Bank (ADB) against financing the development of the Chinese-backed Lamu Coal Plant in Kenya. Not only is the project financially unsound, it would also tarnish Kenya’s reputation as a leader in clean energy, worsen environmental quality, and result in millions of tonnes of annual carbon dioxide emissions.

Kenya has emerged as an undisputed leader in clean and renewable energy in Africa, with the overwhelming majority of the country’s electricity currently coming from renewable resources. In fact, Kenya is home to Africa’s largest geothermal and wind power plants, and it will be home to the continent’s largest solar power plant. Kenya’s ambitious emissions reduction targets under the Paris Agreement underscore the country’s commitment to a clean energy future.

The development of the Lamu Coal Plant would be counterproductive to Kenya’s climate goals and would set back the country’s progress in building a sustainable energy system. The proposed 1,050 MW coal plant would emit as much as 8.8 megatonnes of CO2 equivalent per year. The plant’s construction would contribute to global climate change, undermining Kenya’s commitment to reduce emissions under the Paris climate accord. Furthermore, emissions from the power plant would result in detrimental health impacts caused by high levels of local air, water, and soil pollution. The long lifetime of coal-fired power plants would perpetuate these negative environmental and health impacts for decades.

The Lamu Coal Plant would increase African indebtedness to China and potentially undermine African partners’ long-term economic health. Kenyan experts indicate that by the time the project becomes operational, the $2 billion project will likely create unnecessary capacity. Yet the government will be obligated to pay $360 million per annum in fixed annual capacity payments whether or not the electricity is ever dispatched. In contrast, renewable energy prices are falling precipitously, and Kenya has emerged as one of the lowest cost developers of geothermal power in the world.

We understand the need for Kenya to increase electricity supply and access for its citizens. However, instead of financing projects that would produce profoundly negative environmental impacts, the ADB should consider projects that tap into Kenya’s tremendous renewable and low-cost resources. The U.S. has a long track record of successfully working together with the ADB and Kenya on this issue, and we are eager to strengthen our partnership on this front in the future. Thank you for your consideration, and we look forward to your response.