deCOALonize has written an article for, Perspectives, a UNEP publication series that presents views from Major Groups and Stakeholders of Civil Society or about issues that are relevant for them. PERSPECTIVES is coordinated by UNEP’s Major Groups and Stakeholders Branch. “The Impacts on the Community of the Proposed Coal Plant in Lamu” by DeCOALonize introduces the… Read More

King Coal is, almost overnight, being banished from Britain. Bigger than any medieval castle, with its 12 giant white cooling towers gleaming in the sun, the Drax Power Station dominates the horizon for tens of miles across the flat lands of eastern England. For four decades, it has been one of the world’s largest coal… Read More

The Cabinet Secretary for Environment and Regional Development, Prof. Judi Wakhungu stated that coal isn’t clean contrary to previous government position and claims by the project proponents, Amu Power. Those arguing against environmentalists opposing the projects have always maintained that the project will use clean coal technologies which will keep the environment safe. However, Prof. Wakhungu’s position… Read More

This week, an important meeting of the United Nations Educational, Scientific and Cultural Organization’s (UNESCO) World Heritage Committee came to an underwhelming end; thousands of people across the world were hoping the Committee, in its 41st session just concluded in Poland, would live up to its mandate, prioritise culture over coal, and declare as “In… Read More

Al Kags is a Goode Africa Professional, Open Data & Open Gov enthusiast. Over the last few days, I have come out and spoken strongly and publicly against the Coal plant in Lamu. I have enjoined myself with other like minded Kenyans who have used the hashtag #deCOALonize. I have engaged in rigorous debate on my… Read More

As the world shifts from coal-fired power plants in the race to shut down coal plants for less risky and safe natural gas, Kenya is on the journey to setting up one at the acclaimed world heritage site Manda Bay in Lamu. Government officials and private sector proponents say other than creating jobs for locals… Read More

Abstract Can coal thrive in the era of climate change, low-carbon energy, and the global coal crisis? After years of rapid growth, global coal use fell in 2015, and projections point to a massive decline in the future.1 A recent report also shows a sharp decline in the number of new coal-fired power plants being planned… Read More

A government human rights watchdog has raised the red flag on the ongoing mega infrastructure projects in Lamu and wants MPs to intervene to protect local communities from “devastating effects”. The Kenya National Commission on Human Rights (KNCHR) has petitioned the parliamentary Committee on Environment and Natural Resources to investigate complaints that the Sh2.25 trillion… Read More 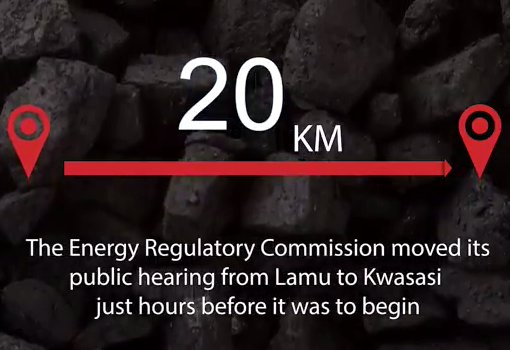