Anti-coal activists in Lamu County are under siege from State agencies whom they accuse of deliberately plotting and setting out to kill activism in the region.

They also accuse the agencies of peddling lies about their activities and deny being foreign agents out to frustrate development efforts. 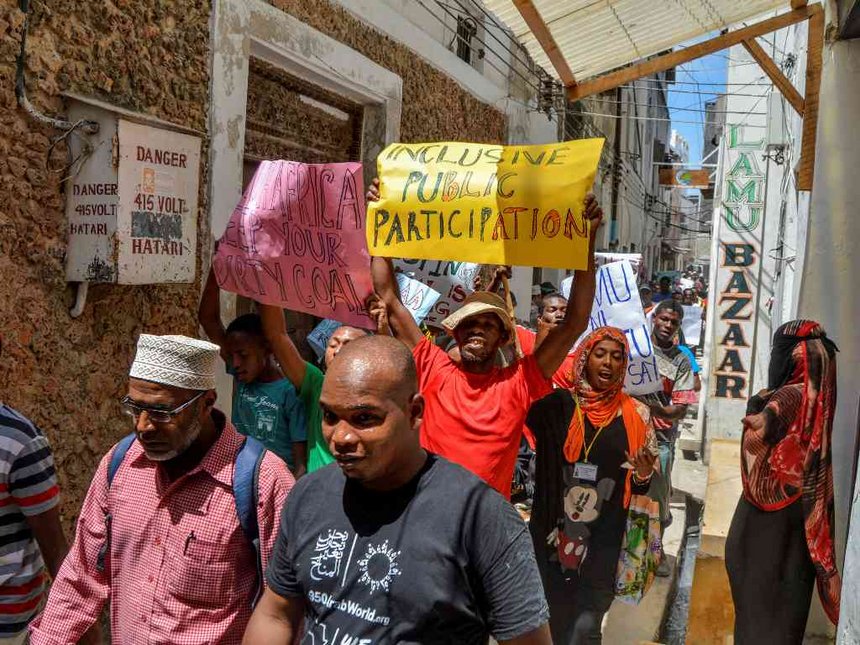 Activists want the government to instead focus on setting up of clean energy projects in line with the ban on plastics if it is serious with safeguarding the environment.

Organisations, notably the Save Lamu, Lamu Youth Alliance and Lamu Marine Forum have been vocal in their opposition to the proposed Sh200 billion Lamu coal fired power plant.

The project, which is being undertaken by the Amu Power Company, a consortium of Gulf Energy and Centum Investment, is set to be established at Kwasasi Village in Hindi division, Lamu West.

A total of 975 acres of land have been set aside for the establishment of the project, which is expected to generate 1,050 megawatts of power upon completion.

It has, however, been under the disapproving eye of activists citing the hazardous effects of coal to the environment and health of people as their major basis for their opposition.

On numerous occasions, the office of the county commissioner has accused anti-coal activists of being funded by foreign organisations to frustrate national government projects in the region.

County Commissioner Joseph Kanyiri has himself stuck it out with anti-coal campaigners who are majorly activists and a select few local leaders terming them enemies of progress.

Mr Kanyiri has previously labeled those opposed to the coal project as corrupt individuals who have fruitlessly sought to be bribed for their support by the investor but failed.

“This is a project between the investor and the government of Kenya and it is being conducted according to all stipulated laws. There is enough research that this isn’t the first project of its kind in the world. Such projects are in America, China, India, Australia and Germany. We understand that some individuals here including activists have been paid to oppose the project. We even know some went as far as asking for bribes in order to support the project but their plans didn’t work,” he said.

Save Lamu Chairman Mohamed Abubakar, however, refutes this and says the government seems to have an ulterior motive by insisting on having a harmful project in Lamu.

Mr Abubakar defended their anti-coal calls saying theirs was pure activism for the good of the people of Lamu.

“I am not happy with the fact that the county commissioner has been moving round claiming activists here are funded by international bodies in order to oppose the coal plant. We are fighting for the rights of the Lamu community. Coal project is known worldwide to be harmful to the environment and human health. Lamu people are not after the project and we will not tire to fight and ensure justice prevails to our people no matter what,” said Mr Abubakar.

Mr Walid Ahmed, the secretary-general of Save Lamu and who doubles as Lamu Youth Alliance Chairman denies the bribery claims terming it malicious.

Mr Walid says in recent times Kenya has portrayed itself as an environmental champion even going ahead to impose the nationwide plastic bag and logging ban across the country.

He says in order for all that to be achieved, there is need for the government to embrace clean energy production and do away with the likes of the coal plant and any other projects, which are hazardous to the environment and human health.

He says it is impossible for the government to achieve environmental health and safety if it will allow the coal plant and similar projects to be set up on Kenyan soil.

“We urge the government to focus more on green energy and any other renewable sources of energy rather than coal. Coal is dangerous and as activists we will not allow such a harmful project to be established in the county. We will use all means possible including legal redress to have the Lamu coal plant stopped,” said Mr Walid.

Mr Walid says they were willing to cooperate with like-minded organisations to ensure that clean and safe environments are created and maintained.

Lamu Youth Alliance member Is’haq Khatib says Kenya must speak in one voice in as far as environmental degradation is concerned.

“They must practice what they preach in as far as environmental protection is concerned. The government should resist the urge to gamble with the lives of the Lamu people through the coal plant,” said Mr Khatib.

Mr Athman insisted on the need by the national government and the investor to fully engage the locals on issues concerning the coal plant instead of forcing the project on locals.