A fight has been brewing and it is about to boil over. The issue is coal and it pits powerful business interests and the Lamu community against each other. Under the ambitious LAPPSET programme, the Government of Kenya plans to build it’s very first coal plant. Worth conservatively at Kshs 200 billion, the coal plant is envisaged to generate 1050 megawatts of energy for the country.

Coal like oil or natural gas is a fossil fuel. It is derived from the remains of dead and ancient plants and animals buried in the earth. Coal has been a source of energy since the 14thcentury Aztecs. More recently, it drove the European industrial revolution powering steam engines, heating buildings and generating electricity. In burning fossil fuels to produce energy, carbon dioxide and other gases are produced and causes global warming.

Understanding this, more than Kshs 340 trillion assets owned by a range of institutions from multi-national corporations, governments and universities across the world are moving their money from planet damaging fossil fuels to renewable energy solutions. Africa and Asia are in the forefront of this. In this context, the battle over Lamu’s coal plant is all the more curious.

In the heart of Lamu County lies Kwasasi village. It is here that the proposed coal plant was supposed to have started back in December 2015. Seventeen months on, Amu Power Company, a consortium of Centum Investments and Gulf Energy have been unable to secure a energy generation licence due to environmental concerns and opposition from the local communities. Represented by their leaders and supported by environmental coalitions deCOALonise and Save Lamu, communities have demanded assurances that their air, water and the entire eco-system will not be polluted.

May and June is a critical moment for Centum Investments and the community. The High Court and the National Environmental Tribunal are set to give their judgments. Project supporters have argued the plant could reverse the region’s historical marginalization, produce jobs and substantively meet the national energy gap. Opponents have counter-argued that coal is dirty energy and contributes to global warming. The plant will also endanger fishing and farming, the main source of livelihood. It could destroy the famous mangroves, negatively affect the tourism industry and a UNESCO World Heritage site.

Former Kenya Energy Regulatory Commission Head Hindpal Jabbal has also raised strong concerns. In his view, renewable energy expansion renders the coal plant unnecessary for Kenya to meet its energy demand. The plant is too costly to run profitably and lastly, he sounds caution on the contractual obligations agreed by the Government. The Amu Power-Government agreement obligates the national Government to pay for key start-up costs and all of the electricity at fixed rates for twenty-five years. Regardless of how much electricity is produced, this will cost the tax-payer Kshs 36 billion shillings annually.

With the African Development Bank (AfDB) considering underwriting this, a sweet deal for Amu Power may be in the making. If it goes through, former AfDB President Donald Kaberukacould be a beneficiary as he now chairs Centum Investments board.

That Lamu County is in need of public and private investment is without doubt. The county has one of the highest poverty and inequality levels. Decades of land privatization and settlement schemes have disrupted social cohesion and caused communal tension. Years of marginalization have only just  begun to be turned around by devolved county governance. In this context, an environmentally risky, socially divisive and climate threatening large-scale extractive project is unwise.

For those of us watching the looming legal deadline for all Kenyan homes to install domestic water heating solar panels by May 28 or face criminal prosecution, it would seem this project also conflicts with the broader long-term vision of our national energy policy. Perhaps this project is best abandoned before we are left with a very costly asset that will soon be stranded as the rest of the world moves on. 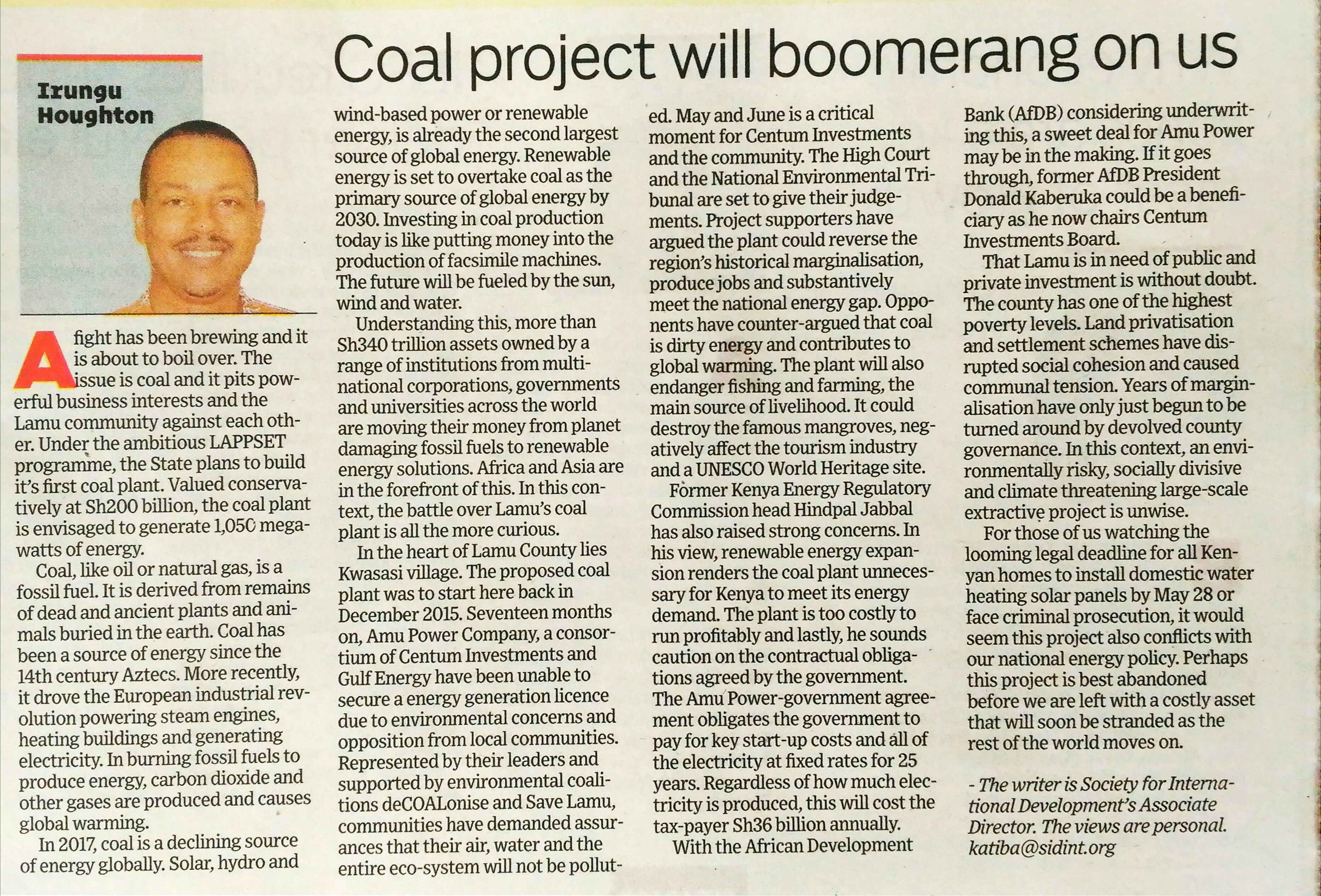 By Irungu Houghton, The Standard