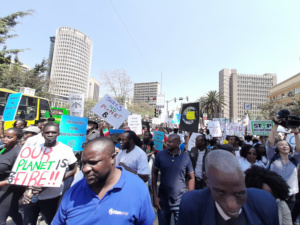 20th September lived up to the hype. It was moving to see so many adults in Kenya and around the world leaving their work and home to come out to support a movement started by children globally.

Greta Thunberg, the 16-year-old founder of the global climate strike was first introduced to the concept of global warming at only 8 years old after watching a documentary in class. She would later go into depression three years later at the age of 11. During this phase of her life, she’s reported to have said she kept wondering if she was ever going to have a future.

That question young Greta Thunberg struggled with during her depression is the question that has propelled the climate strike movement to the global stage as young people all over the world come out to demand that adults make responsible decisions that will guarantee them a sustainable future.

This thinking well resonates with our own Nobel Laureate, the late Prof. Wangari Maathai who begun fighting for mother earth long before it became fashionable.

Her quote, “The generation that destroys the environment is not the generation that pays the price.”, couldn’t have been more timely – especially because that’s exactly what Greta and her peers are saying through the global climate strike.

Indeed Amnesty International Kenya Executive Director, Irũngũ Houghton couldn’t help but notice the impeccable role the late Prof. Wangari Maathai played and how much his generation failed to pick up that mantle so much so that he asked the young people gathered at Freedom Corner Uhuru Park to forgive him and his generation for failing to deal with the climate change issues.

Mr. Irũngũ also awarded Ambassadors of Conscience Award to the pioneers of the #FridaysforFuture in Kenya while expressing gratitude to all those who came out to support the climate strike.

“Long live the spirit of our green warrior Wangari Maathai in the hearts of those that came out today. Prof never saw ecological justice separate from social justice and human rights. I feel we honored her memory and stood up for our future today. Congratulations to all that came out and supported.”, he said.

It was euphoric to see young people from rich and challenging backgrounds mingle in the crowd effortlessly with the older folks supporting them – all demanding for climate justice! It’s this love that also brings with it worry – worry that the government and those in decision-making positions are not doing enough.

Take the mega projects taking place all over Africa in the name of development that is putting our biodiversity and health in jeopardy, not to mention the connection these mega projects have on the livelihoods of the poor and marginalized communities.

In Lamu Kenya for instance, Amu Power – a company put together to build Kenya’s and East Africa’s first coal power plant has the blessings of the government to put up a 1050MW plant despite the National Environmental Tribunal (NET) judgment that pointed out the clear lack of environmental and health impact mitigation measures. Amu Power has appealed this ruling but deCOALonize campaign remains unbowed.

It’s such harmful projects that have gotten young people all over the world skeptical about their government’s sincerity to deal with climate change issues decisively.

Our President Uhuru Kenyatta while in New York for the Climate Change Summit said the country was committed to the fight against climate change.

“Our commitment to tackling climate change is deep and arises out of the need to secure our future and that of our children as we have been victims of droughts and declining rainfall which have destroyed our lives and livelihoods and which call on an increasing requirement of public resources to address emergencies and disasters,” the President said.

This is not the first time President Uhuru is pledging a commitment to stay on the right side of history. In 2018 at the roundtable discussion on “Don’t drop climate efforts” session of the Paris Peace Forum in France the President promised to attain 100% green energy sufficiency by 2020.

“Our target is to attain 100% green energy sufficiency by 2020. We will do this while we achieve 100 % access to power for our population, and sharply lower costs to industry to aid our manufacturing push,” said the President in November 2018.

To his credit, President Uhuru’s government has developed and encouraged aggressive investments in renewable energy that saw an additional 310MW injected to the grid through the Lake Turkana Wind Power – controversies around the project notwithstanding.

This is why we find it troubling that a government with such an impressive record would want to reverse these gains by supporting the development of a coal industry at a time when the world is moving away from this outdated technology to mitigate climate change. It’s such decisions that leave the majority of young people unconvinced hence the global climate strikes.

As the American cultural anthropologist, Margaret Mead put it, we should never doubt that a small group of thoughtful, committed citizens can change the world. That step Greta Thunberg took to strike alone outside the Swedish Parliament has birthed a global movement and young people are realizing they’re not as helpless as they thought and are coming out to demand better of their leaders.

In Kenya, our President is saying all the right things and now all we want is action. A beginning point would be to put an end to that bad idea that is the coal plant.